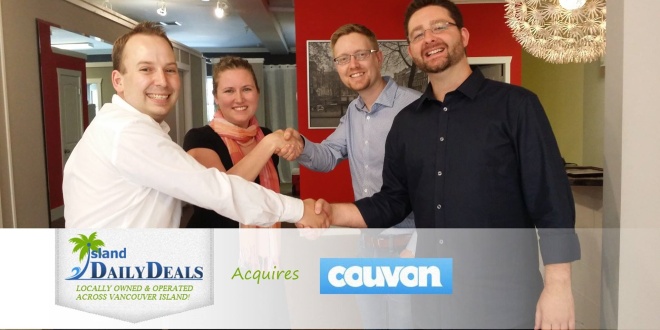 VICTORIA—Keeping Daily Deals in the family, Victoria-based ‘daily deals’ is moving on up-Island! Couvon is proud to announce today that Locally Owned and Operated Island Daily Deals (based in Nanaimo) has acquired Couvon Daily Deal family and our users.

“It’s a local start-up with heart, and that really called out to us,” said Fraser Paterson, who owns Island Daily Deals together with Nadine Shemilt.  “With Couvon’s help, we’re able to reach right into the Victoria market and offer great deals to both consumers and clients. This is a great move up for us in expanding our reach on Vancouver Island.”

Island Daily Deals is a proud local company and currently offers deals in Nanaimo, Courtenay, Campbell River, Duncan, Parksville, Ladysmith and now, Victoria. Founded by 2 Young Island Entrepreneurs, Fraser & Nadine were both born and raised on Vancouver Island and attended Vancouver Island University and started their own business from their kitchen table. Now they are locally located on Commercial Street in Downtown Nanaimo and have already saved our customers over 4.3 Million Dollars in savings, and are dedicated to bringing the best deals. Proud community supporters through Chamber of Commerce, Young Professionals of Nanaimo, DNBIA, and Innovation Island and have even worked with 12 different VIU Alumni inspiring many local entrepreneurs.

Couvon launched in early 2010 and since then, has worked hard to carve out a niche in the ‘group buy’ phenomenon. After acquiring Goya Deal in 2011, they’ve focused on providing topnotch subscriber deals on everything from dining, to retail and recreation, and services like spas, manicures or massages. Today’s announcement marks Couvon’s transition from Victoria –owned and operated to a broader scale .

“It’s excellent to see your business grow and transition and see the value it provides to the community,” said Tobyn Sowden, co-founder of Couvon, “And today, while we might say goodbye to Couvon, we’re thrilled that Island Daily Deals is taking everything we’ve worked to achieve and expanding it.”

Will the deals still be on? Yes! The Couvon website will still be available for users to access and download their coupons, but new deals will be available on www.IslandDailyDeals.com. Customers can check back for regular updates as the transition moves forward.

Previous: Welcome to Our New Website
Next: We are taking part in the Bathtub Days Street Fair

An Ode to our Chief Cuddle Officer